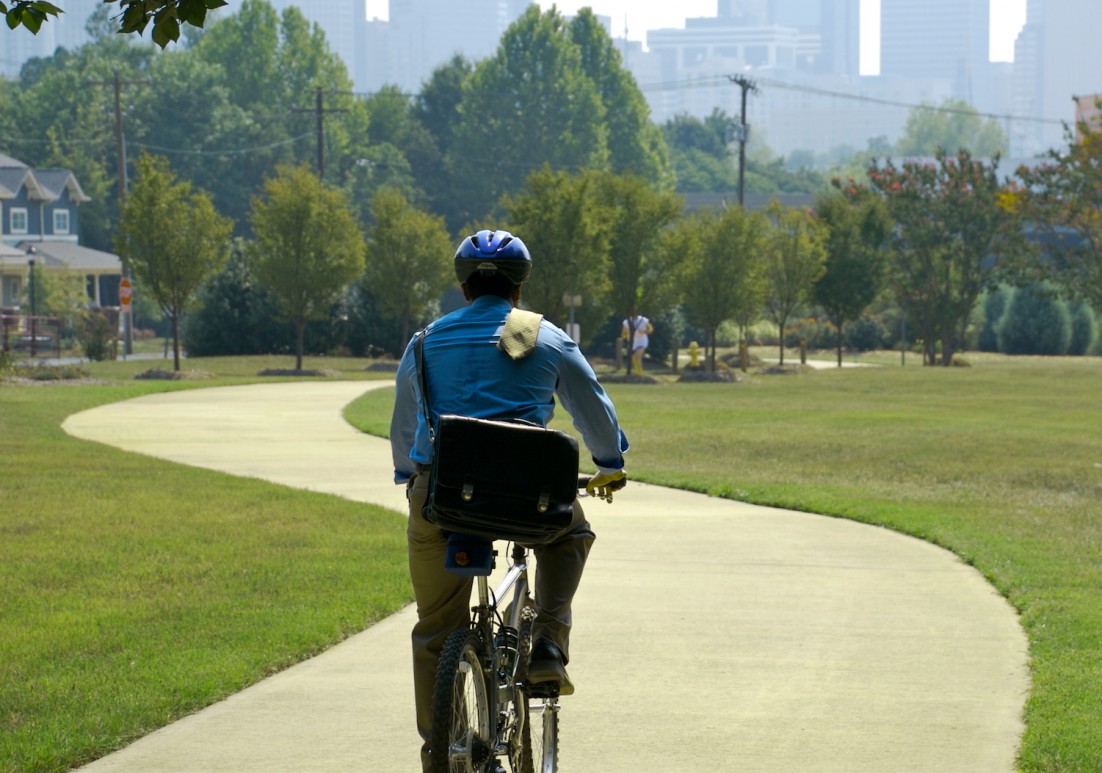 While they are currently a small part of the North Carolina economy, walking and bicycling activities generate significant economic benefits. Facilities for bicyclists and pedestrians generate economic returns through improved health, safety, environmental, and quality of life conditions, as well as by increasing property values, attracting visitors, creating jobs, and attracting employers.

With its mild climate, North Carolina is well-suited to attracting tourists from out of state through bicycle and pedestrian activities. North Carolina is the 6th most visited state in the United States and 2011 was a record year as visitors spent $18 billion. North Carolina hosted approximately 23 million overnight visitors in 2011, many of whom partook in activities related to walking or biking(1). Two percent of out-of-state tourists reported bicycling while on vacation, and 4% participated in hiking activities(2). Tourists unfamiliar with the state will likely be drawn in particular to facilities that make walking and biking safer and easier.

6.7% of occupied housing unit residents in North Carolina do not own a vehicle(3)

North Carolina is also home to many cultural events that rely on walking or bicycling. These events, including carfree street days, street festivals, and art walks, have the potential to generate economic benefits by attracting out-of-town visitors, improving property values by increasing the appeal of communities, and encouraging healthy activity. Durham hosts the "Bull City Summer Streets" event, in which downtown streets are closed to cars on scheduled weekend days to make room for bicyclists, pedestrians, rollerbladers, and dance activities. Cities throughout North Carolina hold regular art walks, in which local artists with shops located on a scheduled route show and sell wares, often accompanied by live music and other attractions. Such events could be further increased, improved, or expanded through changes that make traveling on foot easier and safer.

The North Carolina Department of Commerce's Main Street Program assists small towns in making improvements to reestablish their downtowns as thriving economic centers. Since the Program's start in 1980, towns have experienced a total gain of $1.66 billion in new investment and 14,600 new jobs(4). While the Main Street Program takes a wide approach to improving downtowns that includes promotions, community partnerships, and design improvements, among other strategies, many plans completed through the Program include initiatives to make streets more bicycle and pedestrian friendly. Towns have focused on improving sidewalk connectivity, creating marked walking routes, installing bike lanes, and implementing street-level design improvements for a more enjoyable walking experience. Transforming downtown shopping into an enjoyable, active experience has helped towns attract consumer spending that might previously have occurred at larger shopping centers outside their tax base and improve downtown property values.

THE ECONOMIC IMPACT OF INVESTMENTS IN BICYCLE FACILITIES: A CASE STUDY OF THE NORTHERN OUTER BANKS 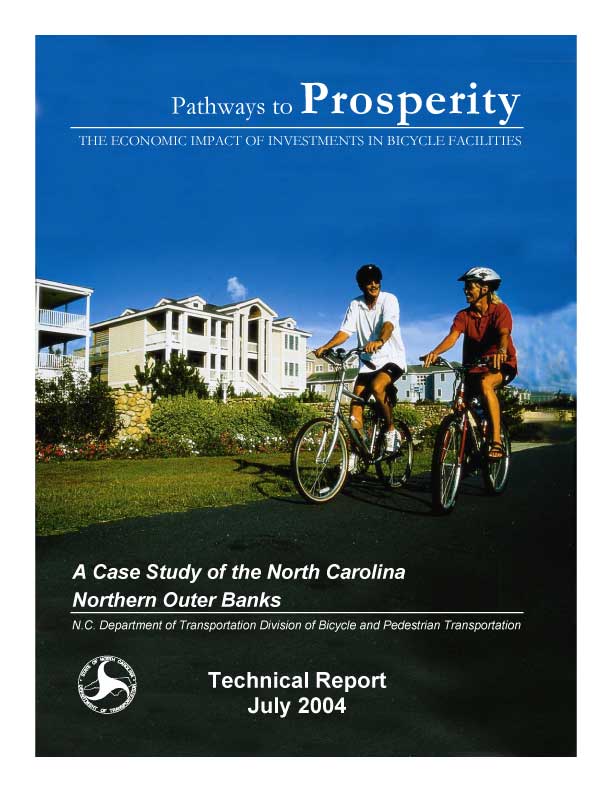 A 2004 study of investments in bicycle facilities on the Outer Banks found substantial benefits from bicycle-related tourism. An estimated 680,000 visitors were found to bicycle in the area annually, resulting in an annual economic impact of $60 million(5). The study found that the economic benefits of bicycle facilities from tourism expenditures alone far outweigh the costs of constructing the facilities. Approximately $6.7 million of municipal, state and federal funds were used to construct the special bicycle facilities in the northern Outer Banks. Other economic benefits, including increased property values and reduced healthcare costs, further improve the ratio of benefits to costs.

BRIDGING THE GAP Economic, Health, and Transportation Impacts from completing a critical link in a 22-mile rail trail

In 2014 ITRE released a report on the effects of completing a critical link in the American Tobacco Trail in Durham, NC: Bridging the Gap: Economic, Health, and Transportation Impacts from completing a critical link in a 22-mile rail trail. The construction of the bridge over Interstate 40 and corresponding paved connections joined the two unconnected trail segments forming a continuous 22-mile shared use path corridor. Data collected before and after the addition of the bridge segment were compared to determine changes. The researchers found that use of the trail increased 133% and additional $3.7 million is spent annually on goods and services by those using the trail. The research also portrayed exceptional gains in the amount of physical activity and economic impact measured by people using the trail, occurring just three short months after the opening of the bridge.

This ITRE led study provides empirical evidence that constructing bicycle and pedestrian facilities, particularly those that fill a critical link in non-motorized transportation network, will result in measurable positive impacts. 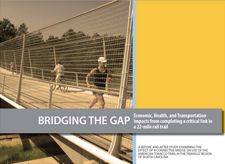 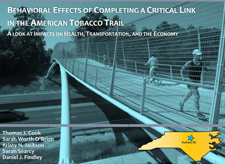 The Greenville Hospital System Swamp Rabbit Trail (SRT) is a 17.5 mile recreational trail running along the Reedy River in Greenville, South Carolina. The SRT, which opened in 2009, was created to provide residents with active recreation opportunities, offer a non-motorized commuting option, and promote economic activity. 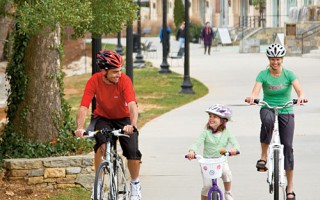 The Virginia Creeper Trail (VCT) is a 34.3 mile recreational trail in southwestern Virginia. The rail-to-trail project, completed in 1984, was developed through a public-private partnership and is maintained by federal, state, and local government agencies, as well as volunteers and private organizations. 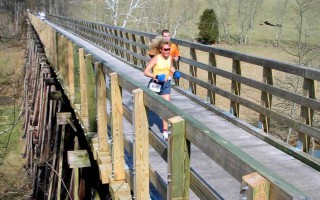 One study found the individual net economic value for recreational use of the VCT to be between $23 to $38 per person per trip. All local and nonlocal visitors spend approximately $2.5 million in the region in per year.

Of this spending, tourists visiting the VCT from outside the study region (Washington and Greyson counties) spend about $1.2 million annually in direct spending, generating $1.6 million in total spending (Bowker 2004, Bowker 2007). An estimated 10,305 overnight visitors and 40,034 day visitors per year come for the primary purpose of using the trail. Nonlocal users traveled an average of 260 miles. When asked to rank the benefits they receive from using the VCT, users ranked health and fitness as the most important.